The Shanghai World Financial Center is the 3rd tallest building in the world with 101 floors and a towering height of 492 m. It took 10 years for this building to be completed and it was in August of 2008 when it first opened. 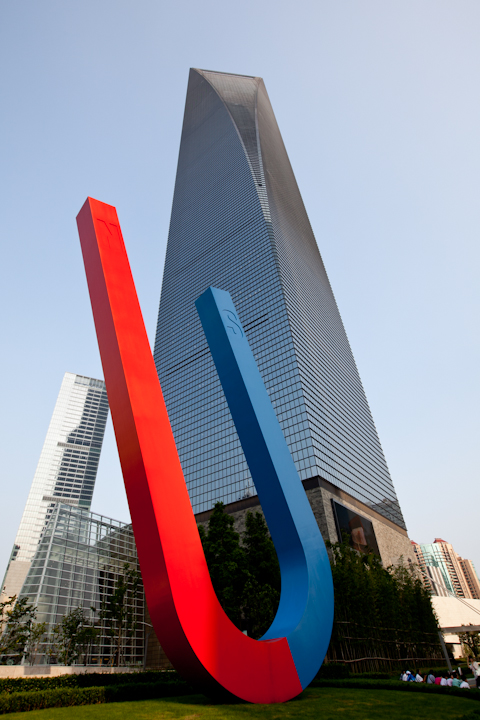 Elevator to the 100th floor 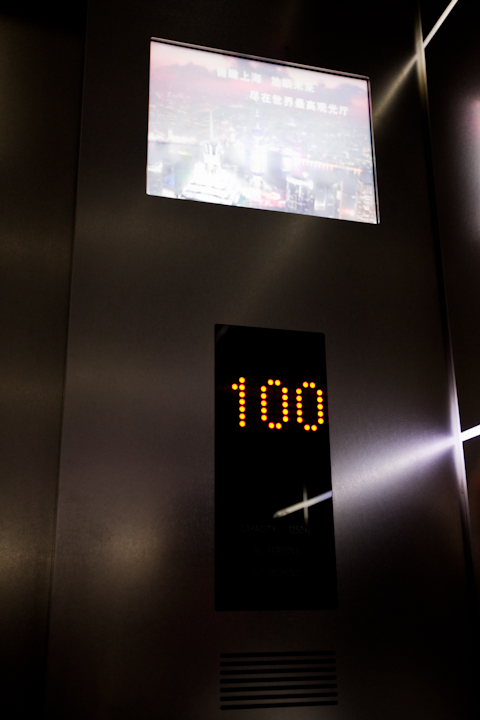 View from the 100th floor

Let me share with you my experience at the SWFC. My husband and I decided to go one afternoon since it was the only time we had left. Once we entered the building we were asked to go down to basement level 1 to get our tickets. The line wasn’t that bad but after getting our tickets we had to fall in line all over again to ride the elevators. We figured that it wouldn’t take that long so we didn’t have to worry (when we went up Taipei 101, we only had to wait a couple of minutes despite the number of people since the elevators were really really fast). When it was our batch’s turn to go in, to our surprise it still wasn’t time to ride the elevators. We went in one room to watch a brief presentation about the Financial Center. After the show, we had to fall in line again just to get into the elevator. We finally rode the elevator to hundreds of meters up and got off somewhere and had to ride an escalator up to the 97th floor. The 97th floor had beautiful views but yes, once again we had to wait for the elevator to the 100th floor. This one moved a tad slower this time. So we just stood behind all those people and we couldn’t be happier when it was our turn. While killing time we saw notes/details about the observatory. As I mentioned earlier the floors had areas made of glass. I don’t remember the exact weight per person but per glass square, even if 3 really big people jumped on that single square it wouldn’t break. I though to myself ‘you’re seriously appealing to people to test that theory aren’t you?’. And true enough, as soon as we got to the top I saw one kid (one huge kid that was taller and bigger than me) jumping up and down with all his might on one little square.  It was a pretty scary sight since there were a couple of more kids doing the same thing. Anyway, the views were breathtaking and did I mention we were really high up? Again, 472 meters above the ground with dozens (and I mean DOZENS) of people in that space. After trying to take pictures and having our picture taken (yes I am always one of those touristy people who would buy expensive pictures at these places but if and only if they have a real background or if they look real), we finally decided we had enough nausea for the day and took our place behind a sea of people for the elevator to the 94th floor. This part wasn’t pleasant at all since some Chinese tourists were rude and wanted to get to the front right away.  At the 94th floor at least there were chairs, a souvenir shop and a coffee shop. We stayed there for a while before deciding to line up for the very last time to go down.

Part of the thrill of traveling is discovering new places, food and meeting new people – along with getting lost, frustrated and annoyed. I can honestly say that Shanghai will never be one of my favorite cities to visit but it’s culture and heritage inspire me to want to explore other parts of China. Our visit to Shanghai will definitely be memorable because of the following:

We booked this hotel because of it’s proximity to the Shanghai Everbright Convention & Exhibition Center. We weren’t disappointed because it was located right in front of the Convention Center. For Chinese standards, this hotel was a bit expensive (around 104 usd/night) but it exceeded our expectations. Among all the hotel rooms we’ve stayed at, our top 2 favorites were Coal Harbor’s Westin (Vancouver, Canada) and Tagaytay Country Suites (Tagaytay, Philippines). Yun’s Paradise is now part of our top 3. The rooms were very clean (probably due to the fact that they only opened this year), the bed/comforter/pillows were cozy (king coil beds!) and the bathroom wasn’t cramped into one small space. It was the type of room where you can sleep in all day.

It’s location wasn’t as close as we wanted to the main areas of attraction but it was only a 10 minute walk (3 blocks) from the subway – Caobao Road Station. A bit of trivia: 3 years ago the Shanghai subway only had 3 lines and because of the world expo their subway now has 13 lines + 1 maglev line. By 2020 the Shanghai metro will surpass Japan’s railway system.

The only thing that I didn’t like about this hotel was their slow lifts. Since the hotel is very new, I expected them to be faster and more efficient. Also, like in most places in Shanghai the staff couldn’t understand english (only a few could). But all in all, this was a very good find.

On our way to the metro from our hotel we found Ichido, a small pastry shop. They sold scrumptious breads and cakes that weren’t too expensive. One thing we noticed about Shanghai was they have well made pastries. It’s not everyday that you find a place where you can just get great pastries anywhere.

Unfortunately, I cannot remember the name of the place where I got this. But it was around the Tianzifang area. It may sound weird but it was really good! The sourness of the lemon mixed very well with the yakult flavor. I wonder if I can make one on my own?

I live for Xiao Long Bao. I really do. But for lunch we decided to also try Din Tai Fung’s spicy wonton. For those who live in Manila, you can find good spicy wonton at Miensan Noodle House (New Manila). But the ones from Din Tai Fung had the perfect mix of chili and the sweetness of their soy sauce. It was by far the best spicy wonton I’ve ever tasted.

They have excellent ice cream and variety at the World Expo – from popsicles, soft served ice cream to packed ice cream on cones and a lot more. There are stalls/carts all over the place but once they run out (they run out towards the end of the day), they have a store at the basement 1 level of the Expo Axis near the China pavillion. The most expensive ones only costs 4 rmb (around 28 pesos).

A great place to get a bite to eat and shop! This is where Din Tai Fung is located and many more great restaurants. The area is composed of restored ‘stone gate” houses along narrow alleys (http://en.wikipedia.org/wiki/Xintiandi) and these houses have been converted into these shops.

As mentioned in my post before leaving for Shanghai, my friend described this area as “old houses transformed into an arts area with cafes and restaurants”. True enough this area was beautiful and so alive. The old houses were converted to restaurants and little boutiques that sell various items from souvenirs to paintings to clothes and jewelry, etc. Some stores were on the second floor but from the first floor you’ll be able to see that most of the houses on the 2nd level were still lived in. We went with our friend and had late lunch at Kommune (http://www.cityweekend.com.cn/shanghai/listings/dining/cafes/has/kommune/). They are famous for their wraps. I had a veggie sandwich that was delicious and my husband had their lamb wrap which was one of their best sellers.  Their smoothies were pretty good but sort of warm. It was a pretty hot day when we went and a bit crowded so that was a bit disappointing. Other than that, I would really recommend that you visit Kommune and Tianzifang. 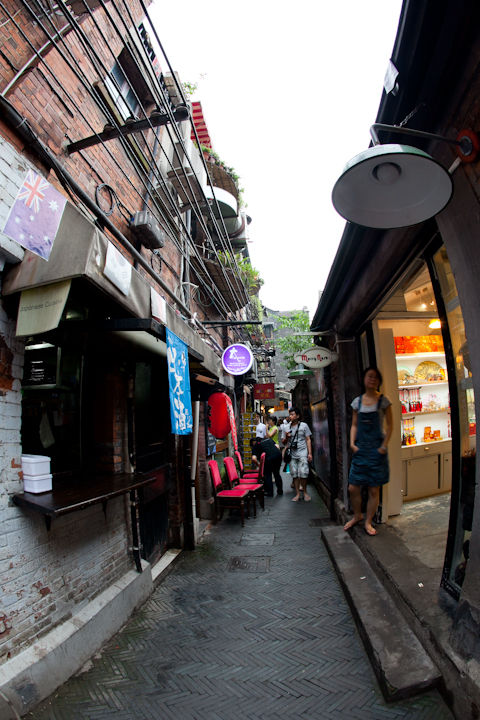 I should have learned a long time ago that I shouldn’t judge places by what people say about them. When I went to Paris, I wasn’t too excited because people told me that it was overrated but as soon as I stepped foot in the city of love, I really fell deeply in love. Even though I didn’t fall for Shanghai, I fell in love with the Pearl Tower. The buildings around the financial/business area surrounding the Pearl Tower were beautiful and properly spaced out. So this structure pretty much stood out. It looked like a pretty cool spaceship to me. Now I know why Shanghai is know for that.

I will discuss the SWFC in another post since this was pretty spectacular yet a bit of an odd experience. It’s not everyday that you get to stand in the world’s highest observation deck 🙂

Memories & Everything In Between